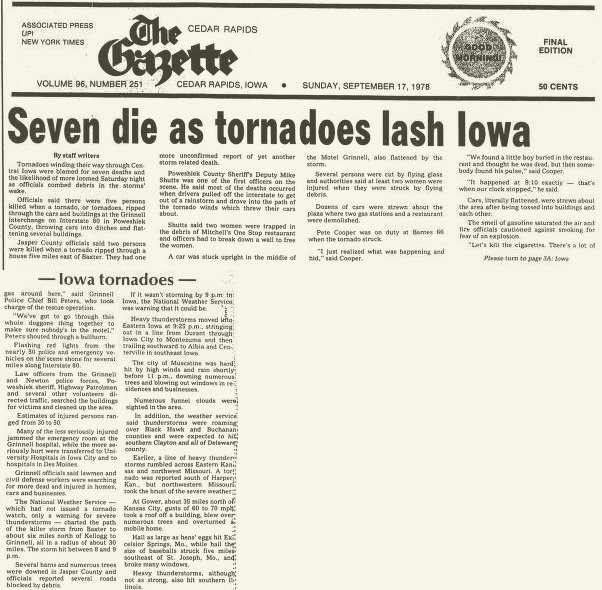 This may not be the season for tornadoes and we’ve seen in the past that tornadoes can occur at any time no matter what the calendar says. One such occurrence was 35 years ago on a Saturday evening in 1978. On this day, a lunar eclipse was taking place in Asia, eastern Africa and far eastern Europe. In Football, Iowa State went to 2-0 defeating San Diego State 14-13 at Jack Trice Stadium (then called Cyclone Stadium and Jack Trice Field). Bob Commings was beginning his final year as coach for the Iowa Hawkeyes and they won their opening game of the season against Northwestern 20-3 in Iowa City. Meanwhile a frontal system was sprawled across the southern counties of the state. A low pressure center was lifting out of Kansas during the morning hours. To the south of the front, readings were in the 90s to over 100 in the southern Plains while to the north temperatures were in the 60s and 70s.

That evening thunderstorms formed over central Iowa. A tornado dropped out of the sky after 8pm east of Rhodes in Marshall County and began moving to the southeast. It hit a farm 5 miles east of Baxter where at least 2 people were killed. The tornado missed the center of Grinnell to the south and west, but unfortunately hit the businesses at the interchange of IA 146 and Interstate 80 a few miles to the south. This is where more fatalities occurred shortly after 9pm. Several Gas Stations and restaurants were destroyed. Several injuries occurred from flying glass when windows broke during the storm. Motorists that had pulled off the interstate at the interchange were also struck and many cars were tossed about, some as far as a football field away from where they had been prior. 3 members of the same family that were from New Hampshire were killed when the car which they were in was carried away and smashed by the tornado winds. The storm damage was over 7 million dollars. Governor Robert Ray declared Jasper and Poweshiek Counties disaster areas. It is noted that the weather service did not issue tornado warnings for the storm, but severe thunderstorm warnings were in effect. The tornado was rated an F3 on the Fujita Scale which was used at the time.