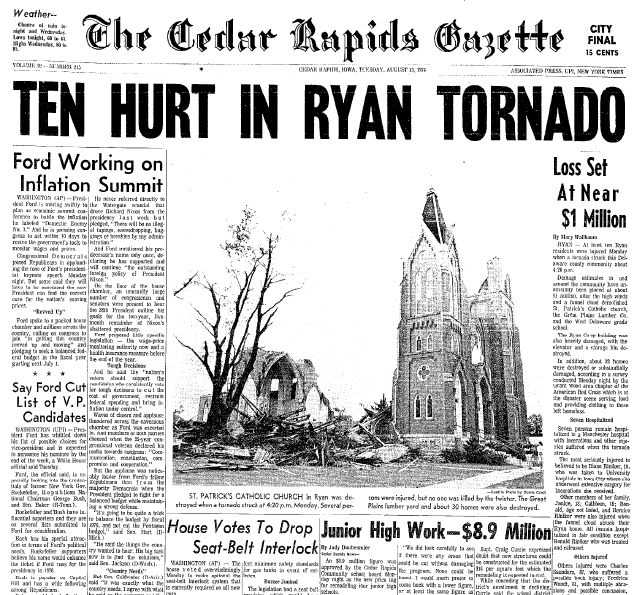 August 12th, 1974, the country was only days into the new Ford Administration after the resignation of Richard Nixon, SAGBRAI (also known as the 2nd Annual RAGBRAI) had finished in Dubuque the previous Saturday and the outlook on corn and soybeans wasn’t looking too good for many area farmers.

Two seperate storms, both produced F4 tornadoes dropped out of the sky on a warm Monday afternoon over eastern Iowa. Just after 4pm, a funnel cloud dropped down to the west of the town of Ryan in Delaware County, moving into the town destroying the Catholic Church (seen above), a lumber company, a grade school and over 30 homes. 12 people were injured in the tornado which after leaving the town headed southeast then south before dissipating after a five mile long path. Damage in Ryan was tolled at $2.5 million dollars ($10.9 Million)(2010)

Another tornado struck near the town of Ladora in Iowa county. This tornado also a F4, struck several farms between Ladora and Marengo as the storm hit a few hours after the Ryan storm. The tornado on the ground for about 2 miles and caused about 250,000 dollars ($1.1 Million)(2010)