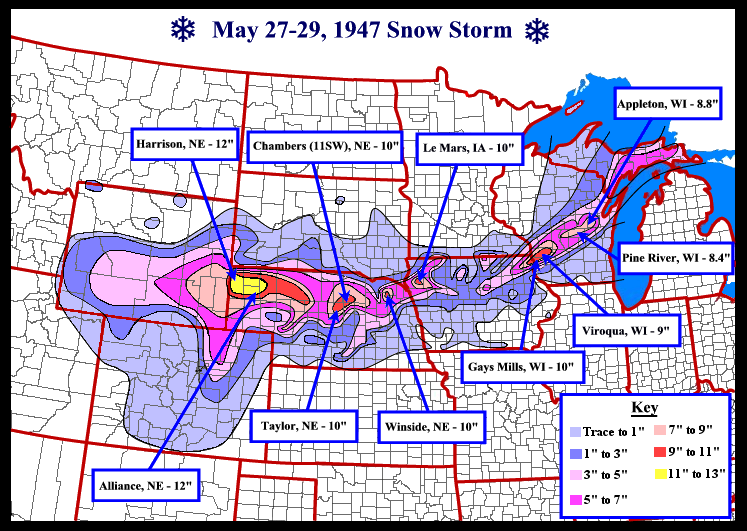 This is certainly something you wouldn’t expect as you head into Memorial Day Weekend, but those in the upper midwest thought the same thing as Memorial Day (then Decoration Day) approached. Temperatures preceding the storm had been in the 60s and 70s (around average for the time of year). A cold front moved through the upper midwest before stalling in central Missouri bringing much colder weather to the area. Temperatures fell into the 30s and 40s as a strong very late season Arctic High Pressure located in the Yukon Territory brought a last taste of winter back to the upper midwest.

A new storm was gathering in the west and began moving to the east. Rain quickly switched to snow over Wyoming and Colorado (not just in the mountains) on the 27th with snow continuing into the night. As the storm slowly moved into Kansas, the cold arctic high pressure had moved to near the US Canadian border bringing sub-freezing temperatures across much of the northern plains and upper midwest. As the cold air continued it’s southward extent, the storm system brought it’s wintery blast through the state of Nebraska dumping a foot of snow at Harrison Nebraska and widespread 6-10″ across the northern half of the state. As the storm moved into Iowa during the night of May 28th, the temperatures allowed the snow to continue, dropping 10 inches on Le Mars (an Iowa Snowfall record for May until it was broken May 2nd 2013 in Britt) and widespread 3″ plus totals across NE Iowa into Wisconsin. The northern 2/3rds of Iowa got at least a trace with the northern half getting at least an inch. It was by far the latest snowstorm to ever hit in Iowa and many other midwest states.