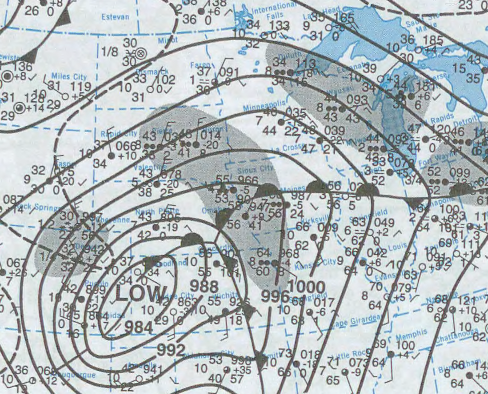 The morning of Wednesday April 11, 2001 was a stormy one across the state. Numerous showers and thunderstorms were roaming the countryside as a storm system was strengthening over the central plains. A warm front was sprawled along the Interstate 80 corridor. It had already been an active weather week. Numerous severe thunderstorm and tornado warnings had been issued two days prior on Monday and there had been severe weather in the state for nearly a week.

It was already an active morning and it wouldn’t end there. By mid-morning a Tornado Watch was issued in Missouri for storms firing along the advancing cold front coming in from eastern Kansas. One storm in particular developed around 10am near Leavensworth Kansas and quickly moved to the NNE. By 11am, tornado warnings had been issued in NW Missouri for the storm east of St. Joseph. A tornado (which would be the strongest tornado in Iowa that day (An F3) touched down near Denver MO in northern Gentry County and quickly moved into neighboring Worth County before moving into Iowa 40 minutes later. The tornado was on the ground for over 75 miles (becoming the longest tracked tornado of the outbreak)

As that storm moved into southern Iowa west of Lamoni, the SPC issued a Tornado Watch until 5pm for the central portions of the state. Numerous tornadoes began dropping out of the sky after Noon. A few east of Council Bluffs damaged a few farms. As the storm containing the F3 tornado approached the Des Moines Metro Area, it began to weaken (The tornado lifted near Patterson) and moved through the Metro with only a brief touchdown at Saylorville.

As that storm continued moving NNE away from Des Moines, new storms were firing along the cold front that was sweeping into the state from the SW. Numerous warnings went out including tornado warnings all along the line. Tornadoes touched down in Guthrie, Boone and Greene Counties between 2:30-3:30pm. By 3pm the storms were along a line extending from Rockwell City to Des Moines to Centerville continuing to move NE. (The only tornado warning was in Boone County at the time)

At the same time the southern end of the line extended south to just NW of Kirksville MO. The southern most storm in the line moved NE with little fanfare (no severe thunderstorm or tornado warnings). At 4pm a F2 tornado slammed into the small town of Agency in Wapello County east of Ottumwa killing two women at the Old Fellows Hall. The storm came without warning. The warning wasn’t issued by the NWS in Des Moines until after the tornado had passed by the town and was to the NE.

At the end of the day, 28 tornadoes touched down in the state of Iowa. That broke the old record for tornadoes set in a day of 22 which had set during the Mother’s Day Outbreak in 1988. (May 8, 1988). It continues to be the record for most tornades in a day in the state. Hopefully something we won’t break anytime soon.