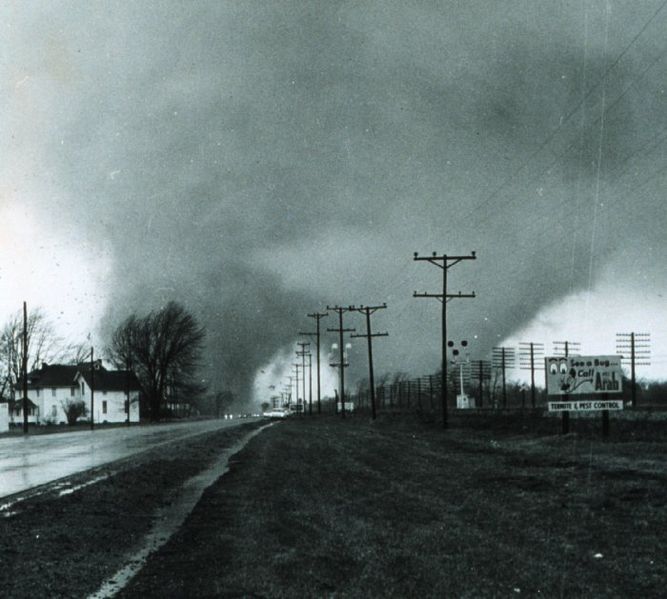 Although this tornado outbreak mainly effected areas to the east of Iowa, its start was in the eastern part of the state. A Low pressure center was located over central Iowa on the morning of April 11th 1965. A Warm front extended eastward along northern Illinois, northern Indiana into Ohio. By midday, the first tornado of the outbreak formed near Tipton in Cedar County. That tornado (an F4) would traverse 90 miles northeasterly across Cedar, Clinton and Jackson counties. Another weaker tornado was closer to the low pressure system near New Hampton. 1 person died from injuries in the Cedar County storm a month after the tornado.

The most famous tornado of this outbreak was the one pictured here. The famous twin tornado at Dunlap Indiana taken by Paul Huffman. This tornado detroyed the Midway Trailer Court in Dunlap killing 31 people. In all the outbreak killed 271 people (256 in other accounts) with 1500 injured (1200 of them in Indiana alone). This outbreak led to numerous changes at the US Weather Bureau, (now known as the National Weather Service). At the time, Tornado Watches were known as Tornado Forecasts, and tornado warnings were known as Tornado alerts. Many of the people that had died had not recieved word of the impending danger due to many having gone to church services for Palm Sunday. The entire warning process failed. The public didn’t know the difference between a forecast and an alert. After the event, tornado forecasts and alerts were changed to watches and warnings.

Also the Severe Local Storms Warning Center was changed into the National Severe Storms Forecast Center in Kansas City (now known as the Storm Prediction Center in Norman Oklahoma) headed up by Allen Pearson (who would go on to work with Theodore (Ted) Fujita to create the Fujita Scale ranking for tornadoes (now known as the Enhanced Fujita Scale.)) The First implementation of this would come in another outbreak 3 weeks later in Minnesota Click Here where alerts and forecasts were still being used, but the public got the warning (through WCCO AM) with only 13 people died.