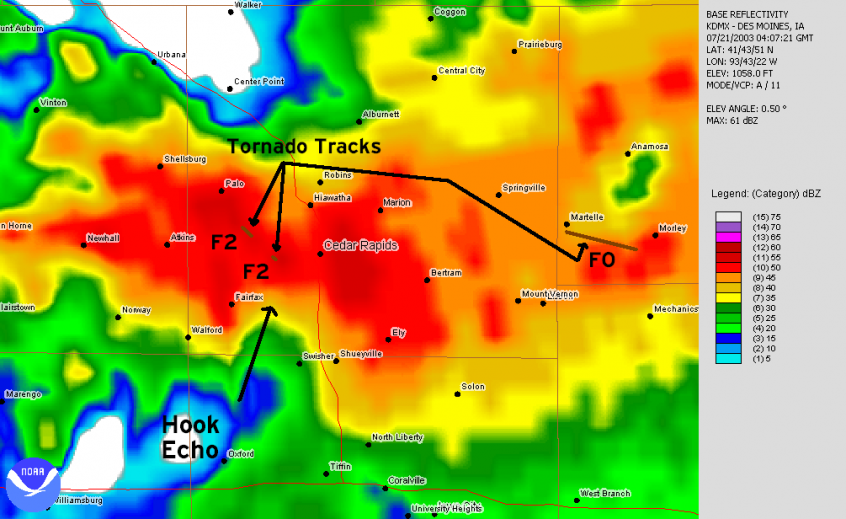 5 years ago on Sunday, the day dawned clear but quickly clouds rolled into Cedar Rapids off a thunderstorm complex in southern Minnesota. That complex fizzled as it moved into Iowa leaving hazy skies and a wind from the northwest. As the day progressed the winds went back to the south, temperatures went into the mid 80s with dew points as high as the mid 70s.

By 5pm a boundary left over from the decaying complex of earlier began building new thunderstorms along the Interstate 380 corridor.

As they moved off to the southeast (along the boundary) new storms were firing well to the west in Nebraska producing tornadoes there.

At 8:30, the Storm Prediction Center issued a Tornado Watch for eastern Iowa, southwestern Wisconsin and northwestern Illinois until 2am Monday morning. The storms continued to intensify as they began to move toward the SE.

By 10pm a rotating supercell had developed within a complex of thunderstorms just to the SE of Waterloo, right along the left over boundary from the earlier storms. This would be the storm that would produce the Peace Avenue Tornado a little after 11pm.

At 10:17 the first tornado touched down in a corn field NW of Vinton.

Since Quad Cities radar was unavailable in the archive velocity from Des Moines didn’t show a lot of rotation at first. But as the tornado was about to lift at 10:27PM. Velocity from the storm intensified as did the tornado before it dissappeared NE of Vinton. The tornado was rated a F1.

As the storm moved SE into Linn County, the hook echo was easily recognizible on radar.

Ten minutes later a second Tornado developed in a corn field about 0.5 miles north of Covington. The tornado moved South Southeast crossing North Glen and Michael Road in Covington and then lifted in another corn field just north of Ellis Road. The tornado damaged a few homes but there was no injuries or deaths. The tornado was rated a Strong F2.

Just past 11pm the hook echo and rotation descended into the NW Side of Cedar Rapids. Sirens had been sounding for quite some time, since about 10:30 when a tornado warning had been issued. At approximately 11:07 (according to NWS reports) the Peace Avenue Tornado Tornado touched down near the intersection of Zelda Drive and E Avenue Northwest. The tornado moved southeast for 0.25 miles across Peace Avenue and then lifted on Floral Avenue. The tornado reached peak intensity on Peace Avenue where F2 winds unroofed 3 homes, and 26 other homes were heavily damaged. This was the first tornado inside the Cedar Rapids city limits since 1965. This was rated a F2 and was the most destructive tornado of the night.

Several other tornadoes occurred as the storm moved to the east and southeast. While the Covington tornado occurred, a small tornado occurred in Jones County near Martelle causing minor damage. Another tornado touched down in NE Cedar County near Clarence doing minor damage to crops and barns. The last tornado occurred on the backside of the storm just before midnight and was witnessed by many people including a storm chaser. This tornado was briefly on the ground south of Mt. Vernon doing damage only to a few telephone poles. At Midnight the storms became a wind dominated event and headed toward the Quad Cities where it became a bow echo and produced wind gust upwards of 90mph and extensive tree damage into west Central Illinois.

Links: Storm Data for July 2003 (includes the reports from the wind event that occurred in the Quad Cities and into Illinois)
NCDC
Iowa Enviromental Mesonet from Iowa State University